In early 2012, some friends of ours got talking to a local resident and  Harley Street hypotherapist called John Mill, who was looking for a cause to support through his work. They told him about Hannah and suggested he give me a call. He did, and the rest, as they say, is history 🙂

Since 2012, John has initiated, organised and hosted one hypnosis event every summer. He has provided venues, publicity, clients and expertise for each of the three shows: a mass hypnosis, a group stop-smoking session, and a ‘butterfly effect’ event. 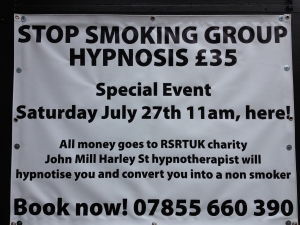 Having attended each event myself, I have seen both John’s professionalism and also his genuine wish to help make a difference to Hannah’s future. He has brought awareness to a whole new group of people locally and several of these people have gone on to help us at other events. Not to mention the £3000 he has raised along the way too 🙂

Our sincerest thanks to John for all his help and support, and for having probably the best job title ever: ‘Director of Possibilities’ 🙂