Over the last few years, several individuals have initiated their own events to help us raise funds. Every one of these means a huge amount to us, not only because of the funds they raise but also because of the thought behind them. It is always humbling to think that others are thinking about us and Hannah and choosing to take action, even without our input or suggestion 🙂 Below are only a very few, by way of an example of the range of support and kindness we have received.

Thanks, one and all.

In April 2014 my old school friend (and, coincidentally, my partner as Heads of Charity in the sixth form at school!) decided to run the Reading half marathon for Reverse Rett. In the event, she had a bad chest infection and was forced to withdraw from the official race, but as soon as she was recovered she organised a repeat run and completed the whole course alone – even more remarkable! Lucy raised £575 and brought awareness of Rett to a whole new group of supporters.

In July 2014, one of Hannah’s friends and the daughter of our good friends, decided to use her 6th birthday party to raise funds for Reverse Rett. Instead of asking for presents from her friends, she asked for donations to the charity, raising £85. Wow. What a great friend, and what a remarkable little girl. Hats off to you Hope 🙂 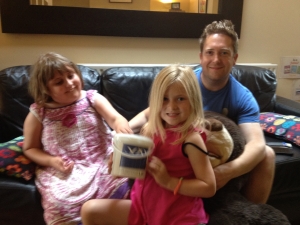 Hannah moved schools last September, but her connection with her previous teachers has continued and is testament to how very much Hannah is loved. Her class teacher from her last year, Lana Roberts, created her own challenge in November 2014 – the £s for lbs challenge 🙂 She embarked on a weight loss/get fit  mission, asking people to sponsor her for every lb lost and also roping in as many others as she could. They raised £155 and lost, well, that’s personal 🙂