In the new year of 2013, the phenomenal fundraising force of Greg McKeague, started putting together a team to take part in the 2013 ‘Just Walk’ challenge. This was the second year Greg had led a Reverse Rett team, covering 60kms of the South Downs in just one day.

Vincent decided to take up the challenge and set about a ‘training’ program which basically consisted of him walking as far as he could every lunch hour at work. He covered a fair amount of ground, listened to a hefty number of audio books, and got to know the streets of London far better than I! However, one hour of walking around the fairly flat, sheltered, concreted paths of central London, is not quite the same thing as covering 60kms of hilly, mussy, boggy, flooded South Downs in strong winds and pelting rain. 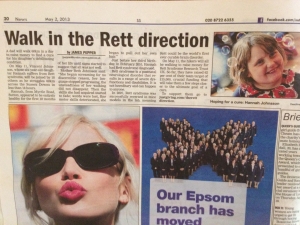 So, as you can imagine, I was mildly concerned that possibly the ‘training’ had not been adequate preparation, and that the reality of the challenge might prove too much. Thankfully, I was wrong. Vincent made the 60kms in good time and with, astonishingly, barely a blister. Good socks, apparently. Our good friend, Adam Bonner, walked alongside Vincent, raising funds both for Reverse Rett and for his own charity, Livability. Vincent and Adam raised £2000, taking Team Reverse Rett’s total to an incredible £24,108!

I should also mention that at the outset of his challenge, Vincent promised to shave his beard if his total reached £1000, which of course it did. He did too. Much to my dismay 😉

‘Just Walk’ 2015 is now open to participants to sign up and Greg is once again inspiring (cajoling, bribing, guilt-tripping) a team into action for Reverse Rett. If you are interested in joining, please go to:  http://www.reverserett.org.uk/events/just-walk-2015